The new demolition work comes as North Korea continues to demolish a nearby floating hotel owned by South Korean company Hyundai Asan, a move that has drawn criticism from the Seoul government.

Ten large apartment buildings appeared to have been partially demolished between April 9 and April 10, according to Planet Labs satellite images, suggesting that North Korea used explosives. The main clubhouse building at the entrance to the resort appeared to remain intact since the last image taken on Sunday. 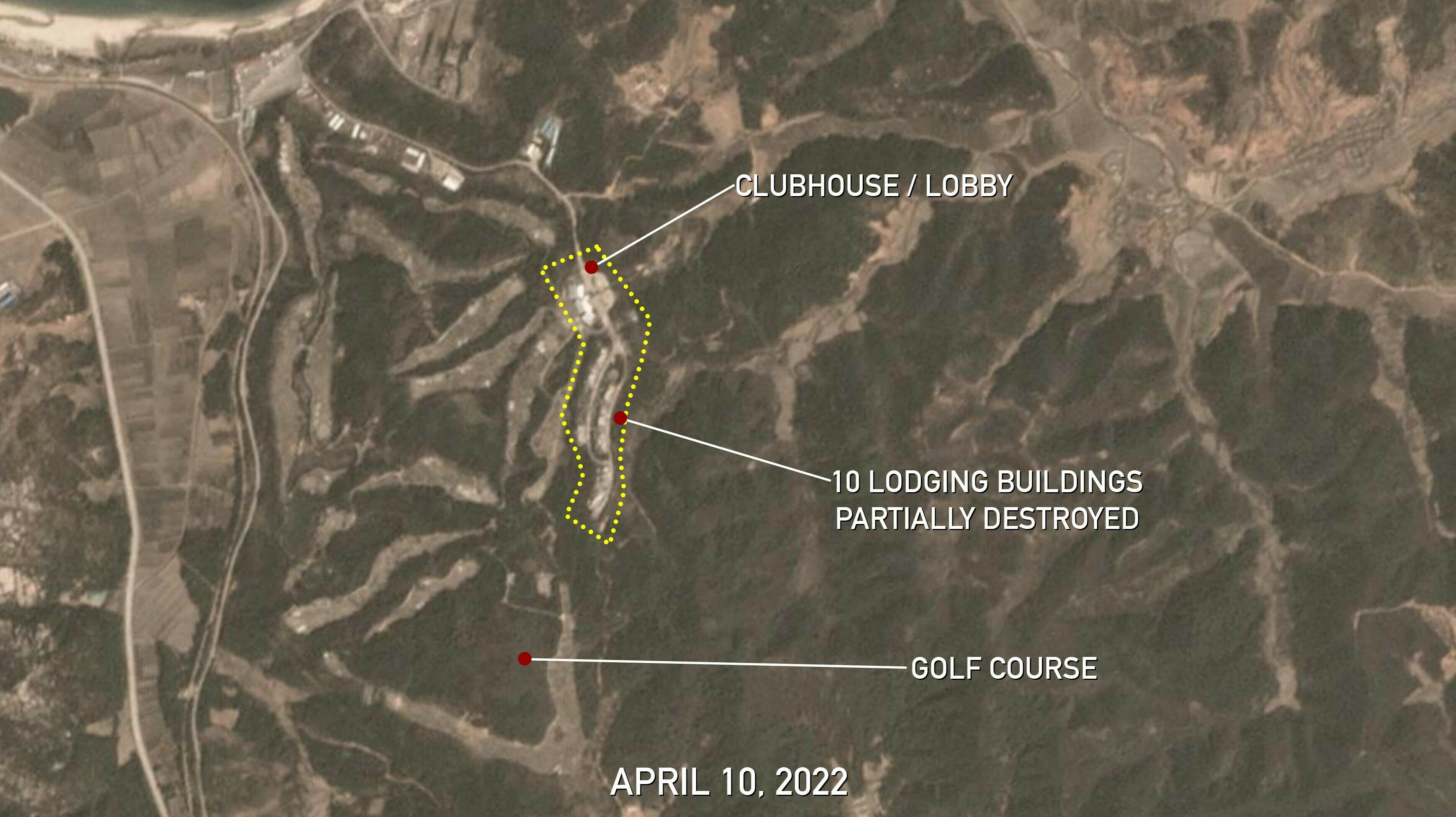 The demolition of the Ananti Golf Resort appears to have started between April 9 and 10 | Images: Planet Labs PBH, edited by NK News 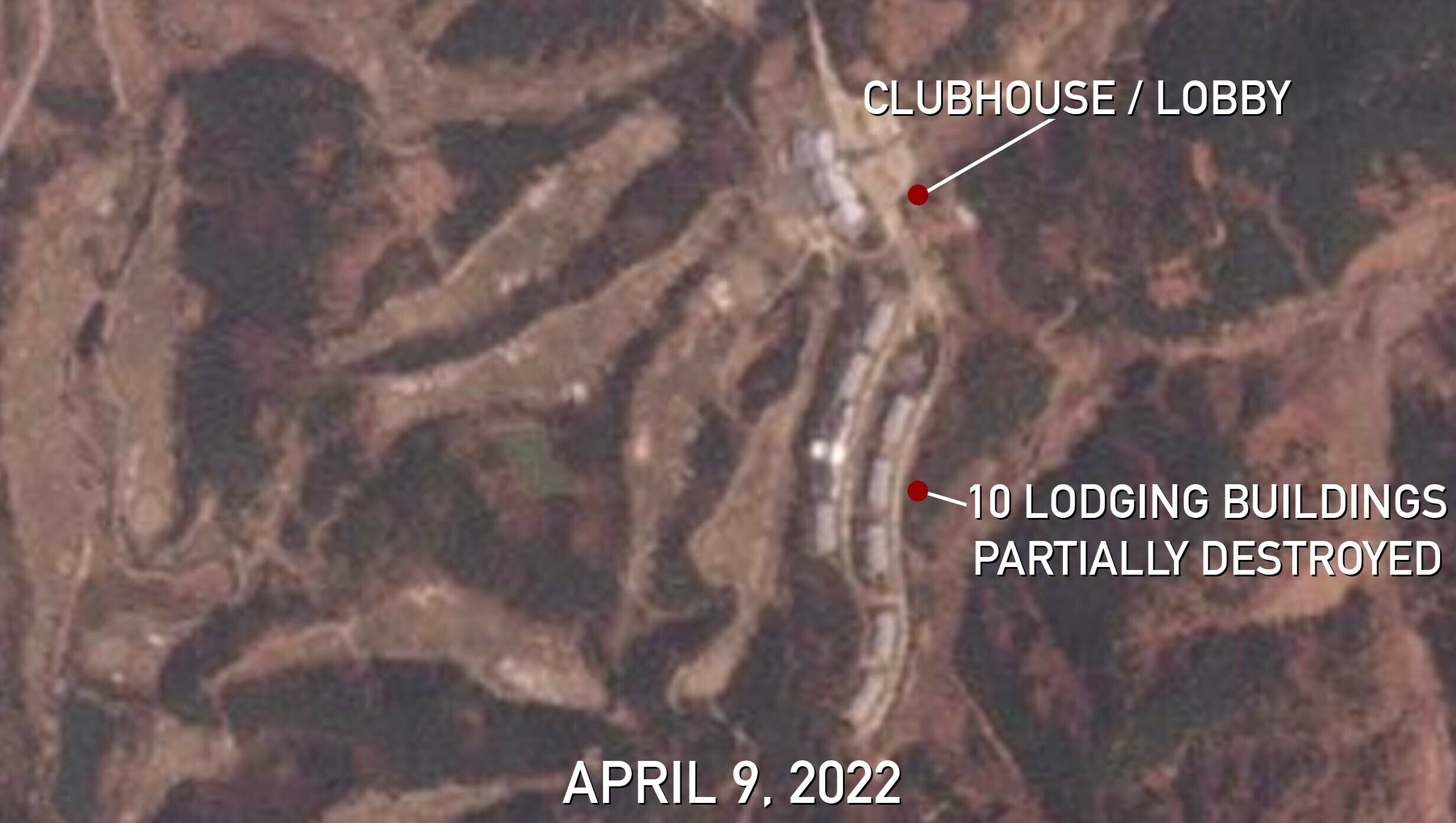 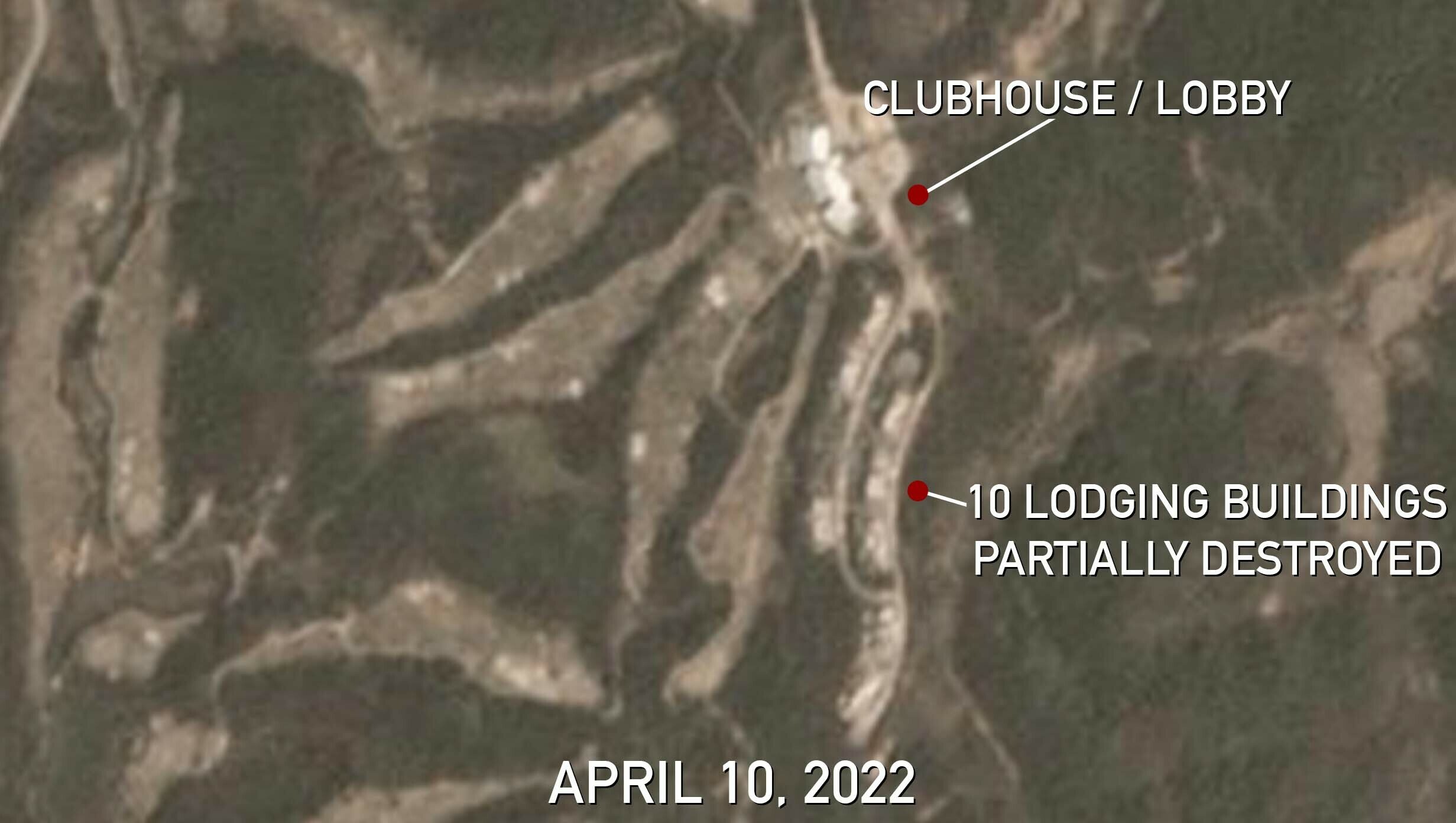 A closer view of the above | Images: Planet Labs PBH, edited by NK News

Ananti Golf and Spa Resort opened to South Korean tourists in 2008 with luxurious facilities and a 19-hole golf course in the city of Kosong, near Mount Kumgang, at a cost of around $75 million. It was only open for less than a year, however, before Seoul suspended all tourism to North Korea after a DPRK soldier shot and killed a South Korean national at Mount Kumgang.

North Korean leader Kim Jong Un said during a visit to Kumgang in Oct 2019 that South Korean assets in the region were “shabby” and lacked “national character”, and that North Korea would “remove any unpleasant-looking facilities from the south [Korean] side” after reaching an agreement with the relevant parties in the Republic of Korea.

South Korean Unification Ministry and other parties tried to negotiate with North Korea after Kim’s announcement, but Pyongyang declined to discuss the matter in person.

Ananti Chairman Lee Joong-myung expressed hopes as recently as last summer, his resort could still host the 2025 World Amateur Golf Championship, but that doesn’t seem likely to happen after Pyongyang’s decision to scrap it.

A North Korean demolition team started to tear down the Haegumgang floating hotel in early March this year, days before the South Korean presidential election – indicating that Pyongyang intended to send a message to Seoul regardless of which party won the election.

As of April 10, the remains of the Haegumgang Hotel still appeared to be floating in the water, according to satellite images, but it is likely to be completely removed in the coming days or weeks.

Seoul required an explanation from DPRK authorities about the demolition of the hotel last week, but Pyongyang has reportedly yet to respond.

The new demolition work comes as North Korea continues to demolish a nearby floating hotel owned by South Korean company Hyundai Asan, a move that has drawn criticism from the Seoul government.

Iconic Oahu property sold for $20,700,000 Honolulu, HI – CBRE’s Golf & Resort Group announced the recent sale of Makaha Valley Golf Resort & Residences in the Oahu community of Waianae. CBRE was engaged by the owner to market the 644 acre property for sale. Makaha Valley is the last such large-scale, mixed-use development opportunity […]

A magical place any time of the year, Kiawah Island Golf Resort becomes truly enchanting during the holiday season, when fabulous parties and ornate halls mingle with golden sunshine and salty air. Starting Thanksgiving week and continuing through New Years Day, resort guests are invited to enjoy the island in their own way, Lowcountry style. […]

At first glance, to dismiss the possibility of having your golf course designed by Jack Nicklaus, Arnold Palmer or Gary Player and then building the thing yourself might seem a bit unwise. Hiring one of golf’s big three, Nicklaus in particular, has always been a good investment after all, with greens fee revenue, membership dues […]